Singer-songwriter Sheryl Crow was diagnosed with early stage breast cancer in 2006. She underwent minimally invasive surgery and is now an advocate for awareness and early detection, factors she considers crucial in her successful treatment and prognosis.

Her cancer encouraged her to strengthen her attention to the principles of healthy eating. As a result, in 2011 Crow and her personal chef, Chuck White, included some of their favorite recipes in the book If It Makes You Healthy (St. Martin’s Press).

The New York Times bestseller emphasizes healthy and seasonal cooking. Crow and White encourage people to learn where their food comes from and to use the freshest products available, focusing on the nutritional value of ingredients. White is a versatile chef, merging Asian influences with French, Italian and even home-style Southern cuisine. His motto? Healthy food should be fun, not boring.

White got his start in the food industry in 1999 after leaving computer science for culinary school and then working in several five-star restaurants, including The Hermitage Hotel in Nashville, The Little Nell in Aspen and Splendido in Beaver Creek, Colorado. Now based in Franklin, Tennessee, he works as a personal chef for various clients in and around the Nashville area and has worked for Crow since her diagnosis.

What role can cooking play in healing?

Sheryl was into healthy eating before her cancer, but it was rather boring–lots of fish and brown rice. I focused on a more creative approach to healthy cooking, using less refined flours and sugars, but without sacrificing flavor.

What motivated you and Sheryl Crow to write this cookbook?

Sheryl said, “I want to share with other people what you’ve shared with me. We need to do a cookbook.” That got the ball rolling, so we hired a writer and photographer and spent all last year working on the book. I would cook all day while we were on tour and at night would write recipes. I had most of them in my head or on my computer, but I had to get them down on paper.

What did you decide to focus on in the book?

Sheryl isn’t vegan or vegetarian, but a lot of those principles are incorporated into the book. We break it up seasonally. You’re not going to make a tomato salad in the middle of winter. There’s spring and summer–when Sheryl is on tour–and fall and winter–when she’s back at home.

When did you start to focus on health in your cooking?

In 2006 I was cooking for [singer-songwriter] John Mayer when he was on tour with Sheryl, and I researched his diet and started getting into it. My specialty is trying to make healthy cooking fun. I like to take something traditional like lasagna or some other typical pasta dish and try putting a healthy spin on it.

What would you say to casual cooks who might be daunted by stepping into the kitchen to convert to healthy cooking?

People can take baby steps. You don’t have to jump right in, full speed ahead. You can start by trying to figure out where your vegetables come from. And figuring out where your fish is from, and how to know it’s fresh.  Just taking five or ten minutes a day to do a little research can make a difference. Find out what you’re putting in your body. People do that with medicines, so why not with food? You really are what you eat.

What is your ultimate healthy comfort food?

I was raised with a tradition that we’d always make a big pot of chili before it snowed. It was a way to commemorate the snow coming.  To me, with some cornbread, that’s the best comfort food. I can eat two or three bowls. We’ve put a healthy version in the book, which uses some ground soy and turkey.

How have people been responding to the cookbook?

We’ve gotten nothing but great feedback. The market is really saturated with cookbooks but at the same time people are realizing that this book stands out. And working with Sheryl–we’ve been a great team. We inspire each other. 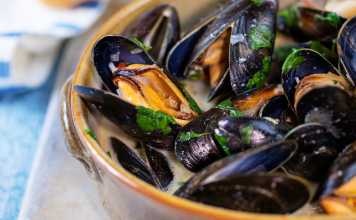 Fabulous Fish – Getting your omega 3s from the sea