Quinoa, revered for centuries by the Incas of Peru, is typically referred to as a grain—but it’s actually a seed. No matter what it’s called, this fabulous food, pronounced “keen-wah,” is a complete protein, with all the amino acids required for adequate nutrition. It’s also high in iron and fiber, easy to make and easy to digest. In short, it’s one great addition to your diet during cancer treatment.

The seeds were first cultivated in the Andes and fed to warriors, to give them power and stamina.  Quinoa was also used in ceremonial meals and rituals. Still today, it is popular across South America, particularly in Bolivia (the globe’s biggest producer of quinoa) and Peru.

Quinoa seeds are round, about the size of sesame seeds, and come in a variety of hues, from beige and red to black. Pick your color according to what you’re serving: red quinoa makes for pretty salads while black quinoa looks especially appealing when served with vegetables such as fava or edamame beans.

Often served as a savory, quinoa also makes a good base for a fortifying breakfast porridge. Add dairy, rice or soymilk, dried fruit and nuts, and the sweetener of your choice (molasses or honey are delicious) for a high-protein and warming start for the day. Leftover quinoa adds bulk to salads or soups, and is an easy weeknight meal when mixed with sautéed greens and tofu, lentils or garbanzo beans.

This recipe for Peruvian quinoa stew is one version of the hearty soup that’s served throughout the Andes, a filling and relatively easy stew that’s full of fiber, protein and colorful vegetable goodness. Added benefits come from the tomatoes, which are high in lycopene, a potent antioxidant that might help in protecting the body against damage from free radicals.

If you like these recipes, check out this quinoa menu, with many more healthy recipe ideas. 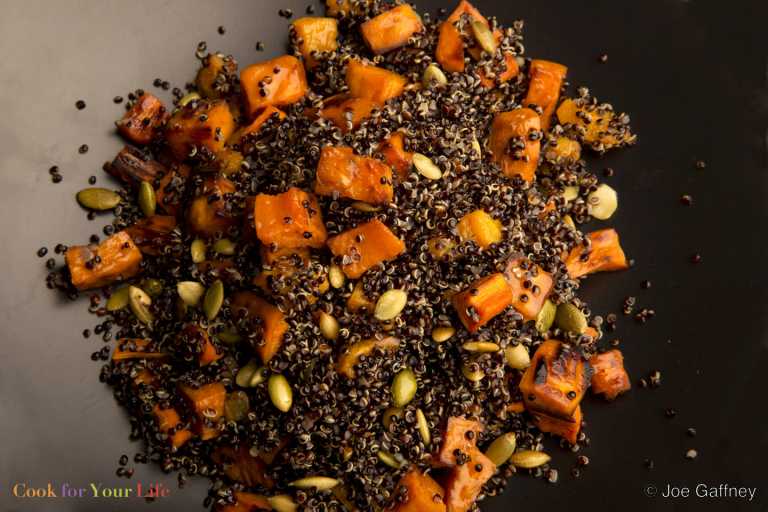