Hans Rueffert is a great chef and one amazing guy. He and I met some 3 years ago when we were on a panel together at Stupid Cancer’s OMG East.

Hans was finalist on the very first season of Next Food Network Star. Just one week after taping the finale he was told he had stage 3 gastric cancer. This began a long series of hospitalizations and surgeries that ended up with Hans eventually losing his entire stomach, and changing the way he eats forever, an irony not lost on him considering his career.

But Hans is the kind of guy who makes lemonade out of life’s lemons. While in hospital and unable to eat solid food, he worked on his cookbook ‘Eat Like There’s No Tomorrow’. He owns the Woodbridge Inn and Restaurant in Jasper Georgia with his wife Amy, and they just had a third child; he teaches cooking to cancer patients in Atlanta, and travels all over the US as an ardent patient advocate for gastric cancer and to promote the importance of cancer patients eating well to stay well.

Since Hans has no stomach his food is literally ‘fast tracked‘ through his system and he knows first hand what makes him feel good or bad. His outlook on life and the joy he takes in food, capture the appreciation he has for living. As I said, he’s quite a guy. Over to Hans.

“I think a lot of folks are confused about what the stomach actually does. Quite honestly, I didn’t fully understand until I lost mine. In the absence of a stomach, I have no stomach acid, and stomach acid is a powerful tool to help break down any of our food “mistakes.” I hate to villainize any foods but there are foods that are over-greasy and over-sugared that the body doesn’t know what to do with. The stomach does a good job of being the first step in stripping back foods with stomach acid, before food moves to the intestine for digestion. In the absence of this first step of stomach breakdown, I am incredibly sensitive to the connection between what I eat and how I feel. Food goes straight into my absorption chamber, so if I eat greasy, heavy foods I feel lethargic, tired and unwell. If I eat foods that my body can absorb, such as foods high in protein and fiber, I feel vibrant and healthy. There’s a true connection between what I eat and how I feel. The reality is that this connection happens for everyone between what they eat and how they feel, but the timing is different. For most people who eat a greasy meal, they may not feel its effects until 12 hours later. For me, it’s instantaneous.

I always caution people that what works for me may not work for you.  For me, although I don’t eat that much meat, the foods which fall in with the paleo diet suit me best. Ancient grains like quinoa, spelt, millet, and amaranth work well for me. I eat mainly plant-based protein with veggies. I also like to garden, so I’ll have tomatoes, squash and cucumber. Whenever I am speaking in my classes about eating healthy, I always say if you’re not used to eating a food, it can do a bit of a number on you unless you gradually ease yourself into eating it. This can certainly be true of beans and lentils. I don’t want people to eat healthy foods, have a bad reaction, and feel like they can’t eat these foods because they don’t agree with them. One of the most helpful suggestions I got was to keep a food diary. I think for everyone it’s a great thing to do, especially around holidays when there’s extra candy and treats lying around, as every bite counts. It can seem harmless and small, but even a small piece of chocolate can really affect your gut, as your pancreas will have to produce extra insulin to cover it. I don’t want people to feel neurotic eating. Its your engine that you are putting things in, and if you’re not filling it with the fuel that its used to, then it not going to work well. I had a partial gastrectomy, and then a full gastrectomy. My doctors said that surgeries were all altering my engine, and explained that while I looked like a ‘Beetle’, I was now more like an electric car, and would need different fuel. All surgeries, even non major gastric surgeries, affect gut flora so you must rebuild those gut bacteria to get full the benefit of your food.” 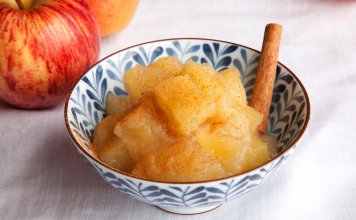 How To Make Applesauce