I’ve been told it’s bad to eat sugar when you have cancer, but I crave it for energy. Should I avoid it completely?

I’m assuming you are referring to the belief that sugar “feeds” cancer. This is one of those concepts that is oversimplified, and can be misleading. During digestion, sugar is broken down into glucose, which is the primary energy source for our cells, including tumor cells. But here’s a fact:  all carbohydrates are broken down into glucose. Carbohydrates are found in wheat and other grains, cereal, fruit, and sweeteners of all kinds (including honey, molasses, and agave).

The real issue, to me, is how does that glucose get into the cell? And is there a way to modulate it? You may be familiar with a hormone called insulin. This hormone opens the cell for the glucose to enter. It is known as a hormone that promotes growth, not a favorable effect when we’re talking about tumors. When we eat carbohydrates and they reduce to glucose, the body responds by releasing insulin. The more glucose, the more insulin. By slowing down the release of glucose, you can prevent large spikes in insulin that promote uptake of glucose and growth of tissue.

I want to turn your question around a little. Rather than focusing on sugar, you should consider the quality of all the carbohydrates you are eating. What I call “high quality” carbs include whole foods and whole grains.  For example, an apple is better than apple sauce is better than apple juice. Or brown rice is better than white rice. The “whole” aspect slows down the digestive process, thereby slowing the production of glucose. In turn, the release of insulin is more stable.

So, what about those cravings for sweets? Make no mistake, sugar is not a “health food.” But sometimes it is just what we need. Keep the amounts moderate and occasional. But remember, it’s not just the sugar. Cakes and pastries come with white flour, another poor quality carb.  Consider making your own desserts with reduced amounts of sugar, along with increased amounts of fruit and whole wheat flour. You can also satisfy your sweet tooth with high quality carbs, such as fruit and some of the sweeter vegetables, such as sweet potatoes, winter squash, peas, carrots and beets.

Quick answer: Sugar feeds all cells, not just cancer cells and should be limited but not completely avoided. 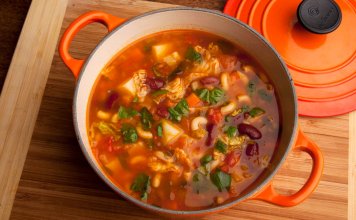