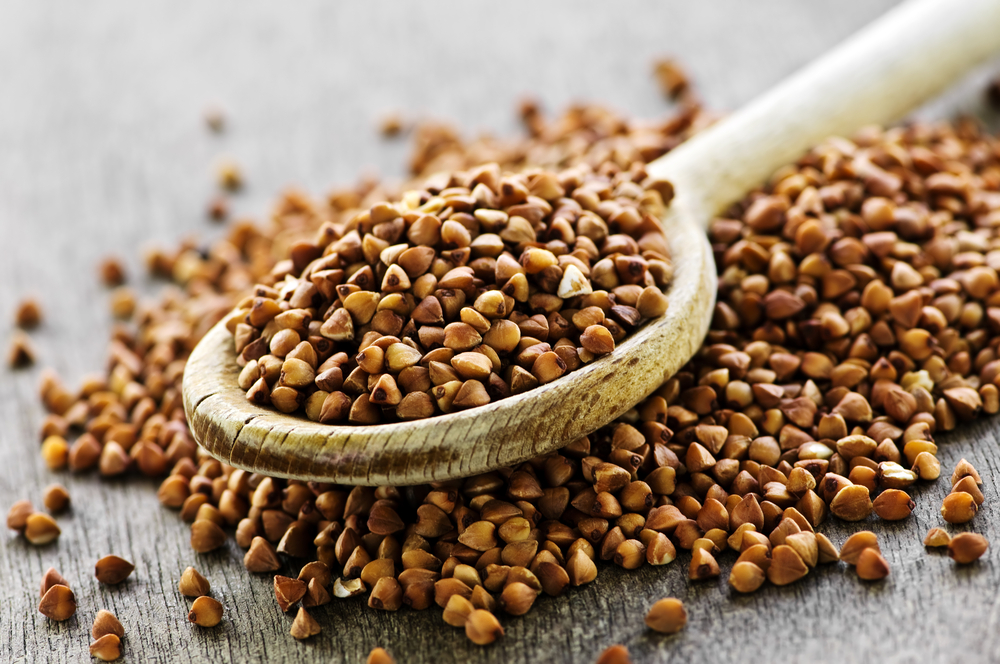 Possibly one of the most overlooked whole grains, buckwheat packs a hefty nutritional punch. Often mistaken as a relative of wheat, hulled buckwheat is a pseudo-cereal packed with all the benefits of whole grains – including fiber, potassium, and magnesium – except it is gluten free. This makes it a friendly wheat alternative for those with celiac disease or wheat allergies. The pyramid shaped seeds, commonly referred to as buckwheat groats or roasted groats (kasha), are sold in multiple forms including hulled groats and buckwheat flour. Once the unhulled groats are harvested, the buckwheat flower itself contains rich nectar, used to produce honey.

Roasted groats, or kasha, can be prepared as a simple side dish similar in consistency to rice with a distinct rich nutty flavor. According to the American Institute for Cancer Research (AICR), roasted buckwheat groats (kasha) are an excellent source of antioxidant rutin, which promotes circulation.

Buckweat is often consumed as noodles, often called soba, that are consumed around the world. If you are gluten-free beware that not all soba noodles on the market are made solely with buckwheat so make sure to buy a brand that is safe for you.

As with most whole grains, AICR suggests verifying that the first ingredient on any whole grain label is in fact, “whole grain” or “whole oat” otherwise it may not contain all the nutritional value you are looking for.

To cook buckwheat as a simple side dish, begin by purchasing hulled roasted groats. Roasting keeps the groats from clumping together like oatmeal and losing their shape. If pre-roasted groats are unavailable, fear not, roasting is a very simple process. To roast, simply add small amounts of raw hulled groats to a large skillet over medium-high heat. Do not add oil or fat. Stir constantly for 4 to 5 minutes. The groats are now ready to use! To serve as a side, begin by prepping a large skillet over medium heat. Add one cup of roasted groats and one beaten egg to your pan. Stir constantly (to keep the groats from clumping), until the mixture is dry and separated. Add two cups of water, stock, or broth. Reduce heat to low and cook uncovered for 15 minutes or until the groats have absorbed all of the liquid. Enjoy!

As an ingredient, buckwheat can be found in many different recipes. To satiate your sweet tooth, check out CFYL’s Whole Grain Berry Pancakes, which uses buckwheat flour. Or, for an unusual dash of buckwheat, try CFYL’s Honey Walnut Cookies, which incorporates buckwheat honey. If you are looking for something more savory and daring, go global with CFYL’s Japanese inspired Cold Soba with Spicy Eggplant Sauce that includes buckwheat noodles.