This Chicken & Noodles in Coconut Lime Broth is one of my favorite Asian-style soups. I used to crave it when I was on chemo. I found its taste comforting, but far from dull. I like to add the spicy kick of jalapeño at the end, but if spice isn’t your thing, it doesn’t need it. Rice noodles are one of the fastest ways to add carbs to a meal. They require no cooking, just a quick soak in boiling hot water until they are ‘al dente’. It’s so easy!

2. Add the chicken broth, milk, lime zest, and fish sauce. Bring to a boil. Lower to a simmer and add the sliced mushrooms, cook for 5 minutes. Season to taste.

3. Meanwhile, soak and drain the rice noodles according to package instructions.

4. Bring the soup back up to a boil, and add the sliced chicken. Cook until the chicken is no longer pink, about 5 minutes. Stir in the spinach and cook for 2 minutes.

5. Turn off the heat and stir in the lime juice, cilantro leaves, and scallions.

6. Divide the rice noodles between 4 bowls. Pour the hot broth over the noodles. Serve with jalapeño slices, if using.

To learn more about the health benefits of ingredients in this recipe, see our articles on ginger, coconut milk, mushrooms, cilantro, and jalapeño.

If you can’t find Thai fish sauce, which adds a delicious briny taste to the soup, just add some salt. The lime will take care of the rest.

If you’re on a neutropenic diet, don’t turn off the heat when you add  the cilantro and scallions, or the jalapeño if using. Cook them in the broth for about 3 minutes before serving. 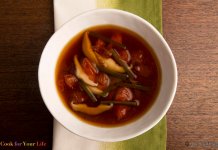