This is one of the best ways to cook fish without the odor. It’s incredibly fast and easy and works with most fish fillets. The vegetables need to be cut very thin and small to cook quickly.

It is traditional and healthiest to use parchment paper to make the packets, but here we are using foil as it is easier to handle. You can line the foil packets with parchment paper if you like. The important thing is not to make them too small as the fish and veggies will create steam, which will expand in the packets.

1. Mix the lime juice, garlic and ginger together. Coat the fish fillets with it and let it sit and marinate for 30 minutes.

3. Tear off 2 squares of aluminum foil large enough to comfortably hold 1 fish fillet. If lining your packets with parchment paper, cut pieces the same size as the foil, and lay it on top of the matte side of the foil.

5. Remove the fish from the marinade, reserving the remaining marinade. Diagonally slash the skin of each fish fillet 3 times. Rub the fillets with the turmeric and coriander.

6. Smear the center of each foil/parchment square with 1 teaspoon oil. Then lay equal amounts of shallots, red pepper, and green beans, onto the foil. Spoon half of the remaining marinade over each vegetable pile. Top the vegetables with a fish fillet, skin side up, then lay the sprig of cilantro over it and sprinkle with a pinch of salt.

7. Fold the foil in half over the fish and tightly roll the sides of the packet together to seal, leaving a small gap open. Mix the coconut milk and remaining marinade. Pour equal amounts of this mixture through the gap into each packet and then finish sealing them. The packet should have the look of a giant empanada or calzone.

8. Lay the packets on a cookie sheet and bake in the oven 10-15 minutes depending on the thickness of the fish.

9. Carefully open the packets, there will be steam. Discard the sprig of cilantro. Sprinkle with chopped cilantro and serve in the half open packets, or plate the vegetables with the fish.

For more information on some of the ingredients in this recipe, see our articles on Fish, Turmeric, and Coconut Milk. 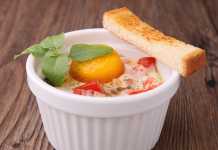