This easy Mexican style leek and potato soup is really delicious, and about as far away from vichyssoise as you can get. It comes together really fast too. I’ve got it to the table in under 40 minutes! The ingredients are few and simple so buy a veggie stock that is clear and light and dilute it 1:1 with the water so its flavor doesn’t takeover the soup, and if you can find super aromatic fresh Mexican oregano for the topping, go for it.

If you have some of our vegan vegetable peel stock ready made in your freezer, it is perfect for this soup. Use a full 8-10 cups of that as it won’t need diluting. This soup is vegan as written, but you can make with Chicken stock if preferred, or add a Parmesan rind along with the leek tops for extra flavor.

I find it easiest to wash the leek whites after slicing them.

When tomatoes are in season at the end of summer, use very ripe beefsteak or Roma tomatoes. At other times use plain canned tomatoes, diced or whole. 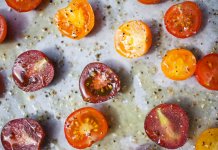