We wouldn’t throw cash out in the trash, yet many of us spend dollars every week on food which ends up in the trash uneaten. It is estimated that between 30-40% of the American food supply is wasted, worth $161 billion dollars. For an American family of four, the average value of discarded food is nearly $1,600 annually.

We don’t set out to waste food, so why does it continue to be a problem? Researchers have found that the main reasons consumers throw out food is due to concern about food borne illness, and for the desire to eat only fresh foods.

By reducing food waste, we are not only helping ourselves but helping society and the environment. Here are some helpful tips to reduce food waste that will get you on the right track:

1. Shop smart and with purpose.
How many times have you gone to the market without a game plan and ended up with a basket worth of products that you didn’t really need? Instead, try to plan out your weekly meals and only buy the necessary ingredients. There are even apps out there including BigOven, Out of Milk, and Grocery iQ that help to manage your lists and organize your meals with provided tips and recipes.

2. Portion out your food in a reasonable and realistic manner.
Blame it on restaurants, but it’s likely that your eyes are bigger than your stomach. Not only can oversized portions be poor for your health, but wasted food from large meals can have a negative impact on climate change. In 2010, it was reported that an estimated 133 billion pounds of food from stores, restaurants and homes was wasted. Oftentimes, this food will end up in landfills that produce methane gas, 20 times more potent than carbon dioxide.

3. Save your leftovers and actually eat them.
Whether you’re dining out or eating home, make it a point to consume your leftovers. If eating the same meal sounds boring, try to spice up your dish by adding other items that you have on hand. Not only are you reducing waste, but you are also tapping into your creativity and your taste buds may thank you.

4. Take note of what you throw in the trash.
If you notice that there are certain products that consistently end up in the garbage, try to avoid buying them or purchase them in smaller amounts. Foods such as fresh berries tend to spoil rather quickly, so it’s best not to buy in bulk, or to freeze the excess so that you don’t have to throw them away. Alternatively, get cooking to use up those almost-gone fruits and veggies. For example, banana bread tends to work best with overly ripe bananas, and is simple to whip together.

5. Utilize your freezer.
If you have perishable items on hand that you know you won’t use in time, pop them in the freezer! Many foods, including grains, meats, fruits and vegetables, will have a much longer shelf life if kept frozen and hold up very well until ready to use. You can even freeze soup broth for a delicious meal that can be ready in a pinch.

6. Donate!
As of 2015, 43.1 million U.S. citizens live in poverty and another 42.2 million citizens live without access to affordable, nutritious food. You can help contribute to the distribution of 4 billion meals a year by finding your nearest food bank on Feeding America.

We hate throwing out food, so we’ve created some yummy recipes which can easily incorporate left over meat or veggies- that way, you’re getting multiple tasty meals, saving money, and saving time. Try our quick leftover curry, vegetable frittata or veggie fried rice.

If none of these tickle your fancy, check out out blog post on freezing foods, which includes a video showing you just how simple it is! 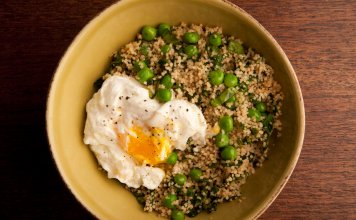