In Japan, eggplant is a favorite summer food, as are cold soba (buckwheat) noodles. They are both thought to be cooling. In this Cold Soba with Spicy Eggplant Sauce dish, they are combined to make a lighter alternative to classic sesame noodles. If you want a more Chinese-y taste to your noodles, simply use any thin Chinese style wheat based noodle instead of soba.

1. Either grill the whole eggplants over a medium flame, turning often with tongs, until the skin is black and charred, or cut them in half lengthwise and bake them, cut side down, on a non stick or well-oiled baking dish at 375 degrees. Grilling should take 20 to 25 minutes; baking 45 minutes to 1 hour. In either case, the eggplants are done when their inner flesh is soft, they are oozing with liquid, and they have collapsed slightly. Remove from heat and allow to cool.

2. When cool enough to handle, either scoop the innards out of the baked eggplants, discarding the skins, or if you grilled them, scrape off the blackened skin. Place about one-third of the eggplant flesh in a food processor. Pull the remaining eggplant into long stringy pieces, then coarsely chop and place in a bowl.

3. In the food processor with the eggplant, add the garlic, ginger, mirin, vinegar, tamari, brown sugar, peanut butter, toasted sesame oil, and cayenne. Buzz the mixture until smooth; taste, and adjust the seasoning.

4. Transfer the eggplant puree to the bowl with the chopped eggplant and stir to mix. Refrigerate for a couple of hours to let the flavors blend. Bring to room temperature and taste for flavor before serving.

5. Toss the soba noodles with a teaspoon of toasted sesame oil and the cucumber slices.

6. Stir the eggplant sauce well, and spoon it over the pasta. Sprinkle with the scallions, cilantro and toasted sesame seeds, if using. Serve. 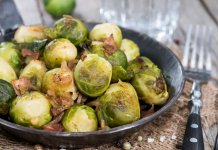