French toast is basically bread pudding made in a frying pan instead of the oven, and I love it in all its forms. French toast was originally a way of using up stale bread. In fact, in French it is called pain perdu or ‘throwaway bread.’

If you use good ingredients, French toast can be a healthy breakfast far removed from the fantasy brunch meal it has become, smothered in syrup and powdered sugar. Eggs, milk, and good-quality bread are the essence of great French toast. Instead of using refined, white breads such as challah, try making French toast with whole-grain rye or whole-wheat bread. Or try some other fancy, whole-grain bread, like a cranberry-walnut loaf.

1. Lay the bread slices in one layer in a shallow baking dish.

2. Break the egg into a 2-cup measuring jug. Add milk to bring it up to a generous 1 cup. Add freshly grated nutmeg or ground cinnamon and beat well.

3. Pour the mixture over the bread and let the bread soak up the liquid. Turn the slices of bread over after a couple of minutes to make sure the bread soaks evenly.

4. Grease a skillet with butter. Heat over a medium-high flame. When the skillet is hot and the butter is melted and bubbling, place the slices of soaked bread in the skillet. Spoon any leftover egg mixture onto the bread slices as you cook them. When one side of the bread is done, flip the slice over and cook the other side until golden brown. That’s it!

Butter has the best non-stick quality of any fat. If you want to go light on the butter, wipe the pan with a used butter wrapper or a little butter smeared onto parchment paper. This will work just as well as a non-stick spray, and without the chemicals.

Eat all sweet treats in moderation. A little bit of what you fancy does you good, but don’t overdo it! 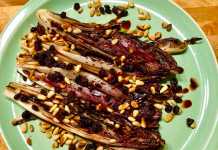