This Celery Root & Potato Soufflee is an elevated alternative to plain mashed potato and is lower in calories and a lot less starchy to boot. I love it with Roast Chicken or Turkey. Celery root, is one of the underestimated root vegetables. Its ugly gnarly outside can be a bit off putting, but its strong peppery ‘celery’ taste is a great foil for bland potatoes.

2. Cut off the gnarly top and the bottom of the celery root knobs. Rinse, scrubbing it well to remove as much dirt as possible from its remaining nooks and crannies. Peel then halve. Cut into ½-inch cubes.

3. Put the diced celery root into a saucepan and cover with cold water. Bring to a boil. Add ½ teaspoon of salt. After the celery root has been boiling for about 5 minutes, add the cubed potato. Cook until both the potatoes and celeriac are tender. Drain, reserving ½ cup of the cooking water.

4. Return drained potatoes and celery root to the saucepan. Add the yogurt and butter or oil if using and mash together until a soft puree is formed. Add a little of the reserved cooking water if it seems too stiff. Taste for salt and add a grind or two of black pepper. Tip into a large bowl. Set aside to cool slightly.

5. Meanwhile add the cream of tartar to the egg whites and beat until stiff peaks. Set aside

6. Beat the chives, cheese and egg yolks together. Tip into the slightly cooled potato and celeriac mixture and beat until well blended.

7. Fold in 1 heaped tablespoon of the beaten egg whites to break up the potato-celeriac mixture. Carefully fold in the rest of the egg whites with a large spatula. Do not over mix – there should be some white streaks. Pour into a buttered soufflé dish.

For a another healthy holiday side take a look at our Souffléed Sweet Potatoes recipe.

These kinds of soufflées do not have the height of classic soufflées made with flour, so if you don’t get a skyscraper, don’t worry, it’s as it should be.

Tipping the mash into a large bowl will help it cool quicker before adding the egg mixture and give you more room to gently fold in the beaten egg whites, to keep in the air you are adding.

Celeriac is nutrient rich in minerals like magnanese, phosphate, iron, and copper and in vitamins C & B6. 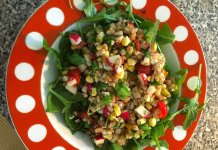 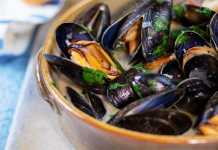