I lately learned to love Turmeric Latkes as a special Hannukah treat. When I first came to live in New York City, as a vegetarian fashion designer working in the garment center, I often used to eat lunch at one of the old-style Kosher dairy restaurants that were once common in the area. Of my favorite things to eat, latkes with sour cream and applesauce ruled. How could I resist a combo that was at the same time strange to me yet completely homey? I hope you’ll feel the same way about the healthy turmeric update we’ve made to this delicious holiday favorite. Why not give these turmeric latkes a try?

2. Heat the oil in wide skillet over medium heat. Once the oil is hot, pour a heaping tablespoon of the batter into the skillet. Flatten with the back of the spoon for a 3-inch latke. Cook as many latkes in the pan as you can without over crowding.

3. Cook until golden and crispy on the bottom, about 3-5 minutes, then flip and cook for another 3-5 minutes. Transfer to a plate lined with paper towels.

If not serving the latkes immediately keep the cooked latkes warm and crispy in a preheated 200 degree oven. They can also be reheated in an oven. 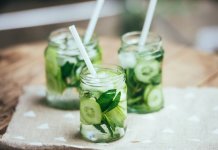